Whenever I take up a new activity I immediately ask myself several questions: “What is smartest way to approach this? What mistakes do people often make? What is commonly known about it? What isn’t commonly known, but should be?”
When I first began drinking, my approach was not particularly sophisticated. I had two main rules:

Since then, as I have become more interested in the realm of health optimization, biohacking, and human physiology in general, I have learned a tremendous amount about how alcohol actually impacts our systems. Yes there are some minor health benefits, but overall it’s pretty scary stuff. But knowledge is power, and over the years I have developed a system for drinking that allows me to still experience the physical and social benefits whilst mitigating as many of the downsides as possible.

I’ve decided to share my evolving collection of research here for those fellow nerds who have an unhealthy relationship attachment style to PubMed. For those who don’t care about the “How” of hangover prevention and just want to skip to the practical dirty deets, go here:

For those fellow data junkies, enjoy!

The Basics of Alcohol Metabolism

After consumption, alcohol is mostly absorbed in the upper GI tract and then enters the liver via the portal vein. However, contrary to popular belief, some of it still does reach the distal small intestine, and concentrations close to the colon within an hour of drinking 2.5 standard drinks (0.8g/kg) were shown to reach 200mg/ml.[1]

The majority of alcohol metabolism occurs in cells called hepatocytes, contained in the liver. At lower levels of consumption (average of 2 drinks), the body breaks down the alcohol through a process called oxidative conversion, where the enzyme alcohol dehydrogenase (ADH) turns it into the toxic compound acetaldehyde. This is then converted into acetate by another enzyme, acetaldehyde dehydrogenase (ALDH). In each step, NAD+ is reduced to NADH, resulting in the production of some reactive oxygen species. This process typically results in few negative side effects.[2] When larger amounts of alcohol are consumed, another metabolic pathway is used, known as the microsomal ethanol-oxidizing system, or MEOS (this pathway is also active for a small portion of light drinking), which produces a far greater quantity of reactive oxygen species. [3]

In addition to the liver, some enzymes for oxidative metabolism of alcohol are also present in the intestinal mucosa.[4]

Congeners are minor compounds other than ethanol that occur naturally in alcohol beverages as a result of distilling and fermenting processes. They tend to be present in larger quantities in the darker colored liquors, and often may increase the overall toxicity level of the beverage, resulting in more severe hangover symptoms.[6]

Which alcohol to choose? 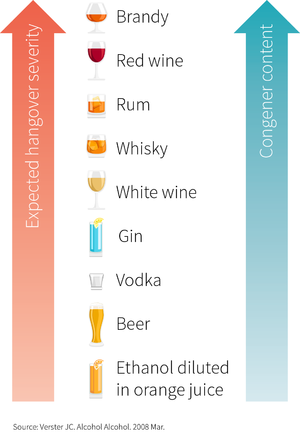 How It Impacts The Body

Acute and chronic ethanol treatment has been shown to increase the production of reactive oxygen species, lower cellular antioxidant levels, and enhance oxidative stress in many tissues, especially the liver. Ethanol-induced oxidative stress plays a major role in the mechanisms by which ethanol produces liver injury. [11]

The metabolism of ethanol to acetaldehyde and the further metabolism of acetaldehyde to acetate by aldehyde oxidase generates free radicals (reactive oxygen species), such as the superoxide anion and hydrogen peroxide, which in the presence of transition metal ions generate the hydroxyl radical which attacks acetaldehyde with acetyl and methyl radical formation.[12]. These may contribute to alcohol-induced injury and carcinogenesis [13][14][15]. It also results in DNA cleavage [16].

Alcohol use is associated with a diverse array of behavioral effects, including intoxication, motor incoordination, cognitive impairment, and tolerance and dependence. These effects are likely due to its actions on multiple brain proteins and ion channels[17]. Gamma-aminobutyric acid (GABA) is the primary inhibatory neurotransmitter in the central nervous system (CNS). Gamma-aminobutyric acid type A (GABAA) receptors seem to occupy a central role in mediating the effects of ethanol in the CNS[18]. This is especially likely to play a role in the development of alcohol dependence and tolerance.[19]. Intoxicating concentrations (5–50 mM) of ethanol were shown to enhance the function of GABAA receptors [20].

One study showed that every gram of alcohol consumed per day was linked to 0.02 years of brain aging — that's about a week of additional aging in the brain. Cumulatively, people who reported drinking every day or on most days, had about 5 months (0.4 years) of additional aging in their brains compared to people who were the same chronological age as them, but reported less frequent drinking[22]

Alcohol inhibits the pituitary gland's secretion of vasopressin, an antidiuretic hormone that keeps you from urinating unintentionally (it is then actually increased post-drinking)[23]. When this enzyme is suppressed, water is sent right to your bladder (along with electrolytes) to be excreted, causing you to urinate more often. This can lead to dehydration.[24]

At intoxicating levels, alcohol is a vasodilator (it causes blood vessels to relax and widen), but at even higher levels, it becomes a vasoconstrictor, shrinking the vessels and increasing blood pressure, exacerbating such conditions as migraine headaches and .

When alcohol reaches the liver it gets broken down into acetaldehyde, a compound up to 30 times as toxic as alcohol itself. This then gets broken down down with the enzyme acetaldehyde dehydrogenase and glutathione, turning it into acetate. Drinking too much alcohol depletes the body’s stores of glutathione, allowing for a build-up of acetaldehyde and therefore negative impacts on the body such as hangover symptoms. [28][29][30]

NOTE:Women have less acetaldehyde dehydrogenase and glutathione than men, which may lead to their being more susceptible to the effects of alcohol.

Congeners are ingredients produced as byproducts of distillation and fermentation. They include acetaldehyde, acetone, tannins, and some flavorants. Congeners are thought to worsen the effects of a hangover and are found in greater amounts in darker liquors (such as brandy, whiskey, and red wine) than clear liquors like vodka or gin. One study showed that hangovers tended to be worse after drinking whiskey than after drinking vodka [35]

Disruptions to Your Stomach Lining, Blood Vessels, and Blood Sugar

Alcohol irritates the stomach lining and leads to increased stomach acid production. This can cause nausea, vomiting, and stomach pain. Alcohol can also lead to dips in your blood sugar level, leading to shakiness, fatigue, mood swings, and seizures. It can also cause your blood vessels to expand, sometimes triggering headaches.

Both the oxidative and the nonoxidative metabolites of ethanol can affect the epithelial barrier of the small and large intestines, thereby contributing to GI and liver diseases[37]. It can also contribute to increased permeability of intestinal mucosa [38] as well as disruptions to the immune system [39]. It can even lead to gut dysbiosis and bacterial overgrowth[40][41] 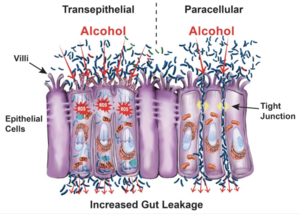 The intestinal barrier regulates the passage of materials, including microbial products, between the inside of the intestine (where food and drink go) and the cells and blood vessels on the other side of the epithelial cell layer lining the inside of the intestine. Alcohol disrupts the intestinal barrier, increasing its permeability, in two ways: via transepithelial mechanisms (cells on the left), which allow material to pass directly through the epithelial cells, and paracellular mechanisms (cells on the right), which allow material to pass through the junctions between the epithelial cells. Alcohol and its metabolites trigger transepithelial mechanisms by damaging the cells directly and weakening cell membranes via several mechanisms including oxidative stress caused by reactive oxygen species (ROS). Alcohol’s metabolites trigger paracellular mechanisms by disrupting the proteins that create the tight junctions linking cells and proteins that stabilize cells’ cytoskeletons. Increased permeability of the intestinal barrier allows bacteria and the toxins they create to leave the gut and infiltrate other organs through the bloodstream. SOURCE:https://www.ncbi.nlm.nih.gov/pmc/articles/PMC5513683/

Alcohol inhibits glutamine, which normally acts as a natural stimulant in your body. This one reason why alcohol has a depressive or sedative effect.[44]During alcohol consumption glutamine production is suppressed, then after you stop drinking, the body works overtime to increase glutamine levels[45], which can result in frequent wake ups during a night's sleep after you drink.[46] A normal night of sleep averages 6-7 REM cycles. After drinking, this is reduced to an average of 2-3 cycles.[47] This glutamine rebound may contribute to the tremors, anxiety, fatigue, restlessness, and even increased blood pressure that are often felt during a hangover.

Acetaldehyde can break and damage DNA within blood stem cells, permanently altering the DNA sequences within these cells. This can lead to the development of certain types of cancer. [55]

Drinking on a Full Stomach

Food in the stomach before drinking not only leads to a lowering of the peak BAC and diminishes the feelings of intoxication, but also boosts the rate of ethanol metabolism. One study showed that total BAC when drinking on a full stomach was 64% that of drinking after an overnight fast. The mean rate of disappearance of alcohol from the blood was also between 36-50% faster after eating.[61]

Chronic alcohol use has been associated with zinc deficiency, and feeding zinc-deficient mice a zinc-deficient diet showed an increased intestinal permeability and higher plasma endotoxin levels [72].

Take ~600mg at least 30 minutes before drinking. NAC is a form of the amino acid cysteine. Both it and Vitamin C (ascorbic acid) are precursors to glutathione and have been shown to break down the acetaldehyde that causes many hangover symptoms.

Gamma-glutamyl transferase (GGT) is a marker of ethanol toxicity in cells. A compound in green tea called (-)-epigallocatechin gallate (EGCG) was shown to limit ethanol toxicity. EGCG failed to prevent the intracellular glutathione loss caused by ethanol, but it appeared to be a strong GGT inhibitor.[80]

Especially B1 and B6 [94]. B2 involved in glutathione recycling.

Taking 400 mg ornithine after alcohol consumption improved various negative feelings and decreased the salivary stress marker cortisol the next morning. These effects were not caused by an increase in acute alcohol metabolism. (After drinking 0.4 g/kg body weight alcohol 1.5 hours before bed)[104]

Also called Acanthopanax senticosus (PEA) or Eleutherococcus senticosus, this is a totally different plant from Red Ginseng. It doesn't have any impact on blood alcohol concentration (BAC), but alcohol's effect on glucose and C-reactive protein (CRP) level was significantly attenuated by PEA, and hangover symptoms were reduced. Therefore, PEA may have potential to reduce the severity of the alcohol hangover by inhibiting the alcohol-induced hypoglycemia and inflammatory response. [105]

Inspired by the metabolism of alcohol, a hepatocyte‐mimicking antidote for alcohol intoxication through the codelivery of the nanocapsules of alcohol oxidase (AOx), catalase (CAT), and aldehyde dehydrogenase (ALDH) to the liver, where AOx and CAT catalyze the oxidation of alcohol to acetaldehyde, while ALDH catalyzes the oxidation of acetaldehyde to acetate. This compound was shown to be quite effective at lowering BAC in mice. [108]

Taking these won’t stop you from getting drunk. It will just help your body to eliminate the toxic byproducts of alcohol processing in a more timely manner.

It is best to avoid using Tylenol (acetaminophen) as a hangover cure, as it puts added stress on the liver.

Think this could help someone? Give it a share!

How We’ve Been Wrong About Healthy Cooking Oils

COVID Scientist, serial entrepreneur, air quality expert, biohacker, and ruthless self-optimizer. I've spent the last decade applying a scientific mindset towards learning and evaluating methods for enhancing physical and mental performance. I believe that science shouldn't be restricted to the abstract, and instead should be the basis for how we live our lives. My Mission is to help people live science-backed optimized lives.

Sign up for a periodic sampling of interesting new applicable hacks, gadgets, recipes, foods, supplements, or sometimes just random thoughts that represent a quick snapshot of my week.

Join and receive actionable tools, tips, and resources pulled from the latest studies:

You have successfully subscribed to the newsletter

There was an error while trying to send your request. Please try again.